The bustling market town of Melton Mowbray, nestled in the heart of rural Leicestershire, is renowned for its distinctive, traditionally cooked Pork Pies and the area is fondly known as the pork pie.

The bustling market town of Melton Mowbray, nestled in the heart of rural Leicestershire, is renowned for its distinctive, traditionally cooked Pork Pies and the area is fondly known as the pork pie.

The English technique of turning pig meat into pork pies is thought to date back to Roman times but the earliest recorded recipe for a Pork Pie is from the 14th Century. However, it was during the 19th century that the pie really came into its own in Melton Mowbray as a convenience food that the Leicestershire huntsman could carry in their saddlebags 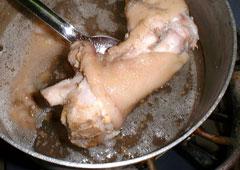 Every year three million pork pies are made in the Melton Mowbray area and these are produced by just five firms of which Dickinson and Morris are the oldest and most famous. Ye Olde Pork Pie Shoppe has been popping out pies since 1851 and now sells on average 400 per day.

Stephen Hallam is the boss and showed me the whole process. The mincing of the meat, seasoning (secret) making the pastry (secret) and even down to the boiling of the trotters to get the famous jelly. 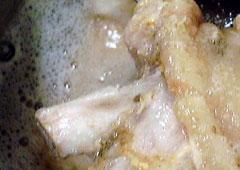 Every pie is made by hand, so you really are getting the real thing here. Once we had stopped filming I tucked into a pie, the flavour is really good with a crisp pastry and beautiful jelly.

It really is the perfect picnic food. The way to tell a real pork pie is the meat should be grey not pink. The pinkness comes from nitrate salt added as a preservative. And of course the distinctive Dickinson & Morris Logo.