Les Salisbury has been shrimping now for the best part of 50 years, his company is one only a handful left to shrimp the treacherous sands of Morecambe Bay.

We filmed one cold yet beautiful sunny May day starting at 4.30 am in the morning. The sun was just rising over the fells as we got onto his adapted tractors.

These fine machines are adapted so they can cope with not only the soft sands but also the seawater. The nets are set out using a very clever shortened trailer that is towed behind using a very long rope and the trundled some 2-3 miles downstream, depending on the tides. 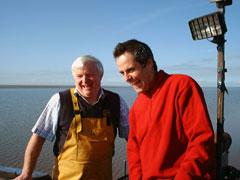 At one point I became more than apprehensive when Les told me we were some 3 miles out. But not to worry as we had three tractors in case one became stuck. If they do get stuck they leave the tractor, and come back the next day with several 40-gallon drums and refloat the thing on the next tide. Amazingly, they normally start again no problem, says Les.

The shrimps are riddled, to remove small shrimps, fish and swimmer crabs, and then packed on the tractors and taken back to shore 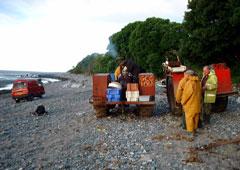 On the way back to shore we came across several abandoned, sunken vehicles including a Land Rover and Toyota Hilux. These probably left by gangmasters or folk who foolishly did not respect the tides. Still, we saw about 100 Chinese cocklers only weeks after 15 lost their lives on this notorious stretch of water.

Once back on dry land the shrimps are boiled, sifted and peeled, some by machine, but many still by hand. Machines cost ‘£50 grand’ says Les, but you can’t beat the proper old fashioned way. He still employs 2 full-time pickers. I tried to keep up with them, they are very quick!

Once picked, they are then boiled in butter and spices (secret recipe and by Les’s nephew) and packed. Topped with butter and sent to the supermarkets. 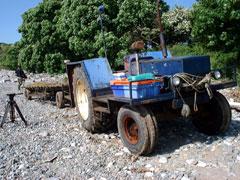 I sometimes think people really have no idea how much work goes into such a small product, if they did they would never query the price. The day was really interesting and a great privilege to meet some great guys.