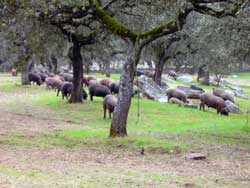 We flew to Seville and were met by a friendly chap called Miguel Ulibarri. He is responsible for overseeing all the PR concerning Iberico pigs for the many companies that produce this beautiful ham.

We drove north from Seville through a semi-industrial area then into the national park of Arratheyna in the western Andalucia countryside; it was beautiful. After about an hour, the terrain became more rocky and mountainous, and the trees became spaced out and very well kept. We finally arrive at the sleepy town of Aracena. Almost the whole town is geared to Iberico ham production. I have never been anywhere like it. 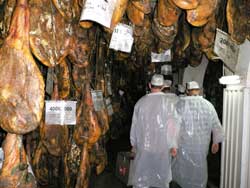 Miguel explained that the pigs roam free and need to be feed on natural grasses, wild herbs, seeds and acorns. The sheer scale of the Iberico pig-producing region is breathtaking. He also explained that the area is the size of Holland!
The pigs are reared to a strict code of practice, no more than 15 pigs per hectare are allowed, or there is not enough food for the pig to grow to its full potential. The pigs have always been in the region and are treated like royalty. 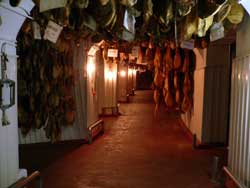 Amazingly, an Iberico black pig will put on a third of its entire weight once the acorns (bellota) start to fall, that’s in about 3 months. They are very fussy, only eating the brown ripe acorns, the green ones they leave, even then removing the outside husk, eating the juicy acorn centre, and spitting out the rest. They live a very happy and contented life up to about a year old.

Once the pigs have been slaughtered, the hams and shoulders are salted very briefly with sea salt. This is to keep the sweetness in the meat, a vital part of Jamon Iberico. I tried to find out for how long, but they would not tell me. 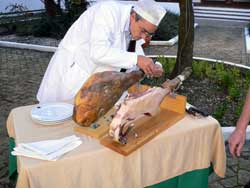 The hams are taken out of the salt and just left to hang in a normal atmosphere and very carefully looked after by the most important man in the business. His job is to keep an eye on the weather, so the hams do not spoil. 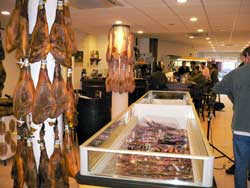 The curing houses have many windows, which are open most of the time to keep the air circulating around the hams. It’s a constant battle to keep the atmosphere correct. The hams can spoil if there is too much moisture in the air, too dry, not dry enough, too much rain, not enough ventilation. The whole drying process is managed by human experience and years of knowledge. It’s amazing. This is where the fungal process begins. Penicillium Roqueforti helps stabilise the fat giving the ham time to mature and build a wonderful aroma.

Some hams are ready to be eaten in 18 months, but they can take up to 5 years. All the time, the acorn oil is spreading throughout the ham, giving it a wonderful aroma. 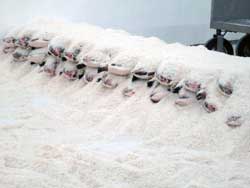 In the factory we filmed in, there is an amazing 50,000 hams and shoulders all sold just waiting for the right moment, it was breathtaking. A small horse or cow bone skewer called a Cala is inserted to tell if the ham is ready. Incisions are made by experts in three parts of the ham to check the right degree of flavour and aroma. Once ready, the ham is then branded with The Real Iberico seal and numbered, carefully wrapped and sold. Some legs can cost as much as £500; the ham is carved into small slices and eaten on special occasions, such as Christmas and birthdays.