To be very honest with you I was not really sure what to expect when we decided to come here. Okay, it’s not an island, but to all intent and purposes, it is. The locals certainly talk to you as though it was. So from one angle, you have north Africa. From the other, you have Spain, and right slap bang in the middle, you have good old blighty.

This huge rock is about it, with a little reclaimed land dotted about. But, on closer inspection, you see that the only thing that separates itself from the Spanish mainland is the airport runway which doubles as a road, but the road has to close several times a day so the planes can land.

The love-hate relationship with Spain is still here, and depending on whom you talk to, it can cause much debate. As they are known, the Gibraltarians are fiercely proud of their British heritage and will defend it to the hilt.

By the time we landed, the sun was high, and it was pleasantly warm. The crew had arrived a day early, so all we needed to do was drop the stuff off at the hotel. A quick shower and shave, then off to catch up with the lads. A car had been booked to transfer us, but sadly he did not turn up. So, we had to make our own way. It was quite bizarre; it was like trying to hail a cab in the middle of Delhi.

We finally arrived at the Rock hotel ten minutes later and checked in. This large tourist hotel is set next to the cable car and up against the rock itself. It is a pleasant and welcoming place. The hotel is about to go through a full refurbishment which is good news as the place is looking a little tired and tatty. It reminds me of a grand seaside hotel that’s seen better days in Bournemouth or Torquay.

I’m not put off, however, as the staff are charming and courteous. The manager Toby Tobelem is very funny and engaging, the Executive Chef Alfred Rodriguez, who has been here many years, is a very good cook. As with all our filming, we shot back to front. So, this meant me eating a splendid and probably the best afternoon tea I have eaten for many a year.

This consisted of four fresh finger sandwiches, including fresh cucumber and prawn. This was followed by fine jam and clotted cream, yes clotted cream scones. However, the spectacular part was the array of small fancies, from perfect chocolate macaroons and chocolate cups filled with raspberry cream to pistachio and raspberry slices. Having polished all that lot off, well, most of it, it was time for lunch!

Executive chef Alfred suggested I eat the fish and chips, as it was fresh hake, so I did. Very fresh fish (well, it should be from here) with crisp chips and real, mushy peas, not garden peas, just mixed up.

Now bursting at the seams, it was off to film some general shots in the town.

The shops are a curious mix of famous high street chains selling cut-price British goods. Then there are gift shops selling everything an ape can resemble (more of this later) plus electronics shops and many outlets flogging cheap, in fact very cheap alcohol and fags. Not only is it cheaper, but there is no VAT here. No wonder the Brits flock here.

I’m not sure what Gibraltar’s cuisine consists of, so after a bit of research, we retire to a famous coffee shop to film a piece on the different food offerings and share our newfound knowledge.

Sacarellos has been her for many years; in fact, it started as a coffee warehouse, now it’s famous for its all-day eclectic cuisine and very good coffee. I tasted a few dishes, all very good. I realised that there are many influences here, North African, Genoise, Spanish, and British. It’s all very confusing.

We say our goodbyes to Patrick, the current owner of Sararacellos taking the short walk to our minibus and head off to a small fish restaurant called La Mamela (it means female breast in Genoise, apparently) on the other side of the rock. It is set in the Catalan bay fishing village. Quite looking forward to finding out more here.

The owner is a larger-than-life character called Ellio. He reminds me of a sort of Spanish Harry Bellafonte, with his charm and wit. He immediately tells me the story of when, in the early 18th Century, a huge rock tumbled down and crashed through the Genoise fishing village, causing a lot of damage, but thankfully no one was hurt. Apparently, the rock displayed out the front of the restaurant is just a small fragment from that rock, and you must caress it to get good luck as the fisherman did before setting out to sea. On closer inspection, the blurb tells you that the restaurant was renamed Titi’s Restaurant. I feel my leg being pulled here and wondered what I had got myself into.

We were to cook and film the simple dish Prawns Pil Pil, with the restaurant’s chef and then taste a sort of local fish stew. The Pil Pil was a roaring success, using minimal ingredients to produce some of the freshest, tastiest prawns I have ever eaten.

The stew arrived as more of paella, with lots of oil and saffron, packed full of squid, lobster, clams and pasta. It was a stunning dish, but sadly a little salty for me.

Ellio asked me if I agreed with the salt content, I did. He then said something to the chef. Course after course arrived, including baby whole peppers fried, prawns in spinach and cream, squid rings, Iberico pork steak, fillet steak, fries and then the tiniest clams you have ever seen with garlic and parsley. Fried John Dory as fresh as a daisy and finally whole anchovies, lightly fried all washed down with rose and deep, full-bodied red wine. Wow, this was good stuff.

We finally rolled out after saying our goodbyes and flopped into our minibus back to the hotel. I had eaten so much I tossed and turned all night, but in a way, it was well worth it.

The next day I was up early and off to meet Vicky Garcia Bishop, the Gib (this is what the locals call themselves) celebrity chef. We plan to cook together at the restaurant at the top of the rock. She was going to show me some sweet and savoury local dishes.

We did a couple of pieces to camera in the cable car, which was fun, although stopping halfway was a bit hairy if I’m honest.

I meet Vicky, who is warm, charming and attractive. We taste a few dishes, a sort of chickpea polenta, some quinces poached in red wine with rose water and some pistachio biscuits with salted peanuts added for balance. She then cooks the almond tart and serves it for me to taste. It was delicious, light and the crisp almonds really setting off the dish perfectly. As you can see, the backdrop was breathtaking, with Spain in the background; what a lovely place to taste delicious food.

The other attraction, of course, is the apes, not monkey’s. Apes are tailless monkeys, the cable car brakeman reliably informs me. I enquire how they got here, and he says that they came from Africa many years ago. They are now protected and fed, and looked after by the government. I happen to bump into Gregory, a 30-year-old ape, and the boss. He is very calm and accepts me chatting with him. We place the camera down, and a baby ape walks straight up to the lens seeing his own reflection. It was a brilliant piece of film. But, of course, you have to be careful; they certainly let you know if you are encroaching too close. 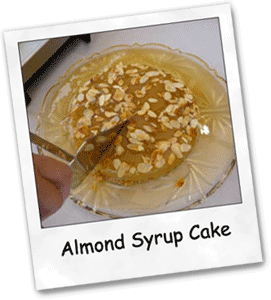 Finally, we set off to the Saga cruise ship, Saga Ruby, to cook, wait for it, rock cakes for the captain and a few guests.

We met Captain Steve Angove, first officer Djanel Benathane and Tanya Whitehurst, who met me and took me on a quick tour. The ship is one of four in the fleet and is very impressive. The staff are charming, and nothing is a problem as we set up for the cookery sequence. Ben, the executive chef, helps out and gets all the ingredients ready. We film on the back deck, overlooking the harbour, then taste inside in a large room, all ready for afternoon tea. I did feel rather scruffy in shorts and a T-shirt, though.

After tea, the Captain shows us the bridge and we film and take some pictures before leaving the ship as it was departing at 8 pm. I have never been on a cruise but having had a good look, you never know…