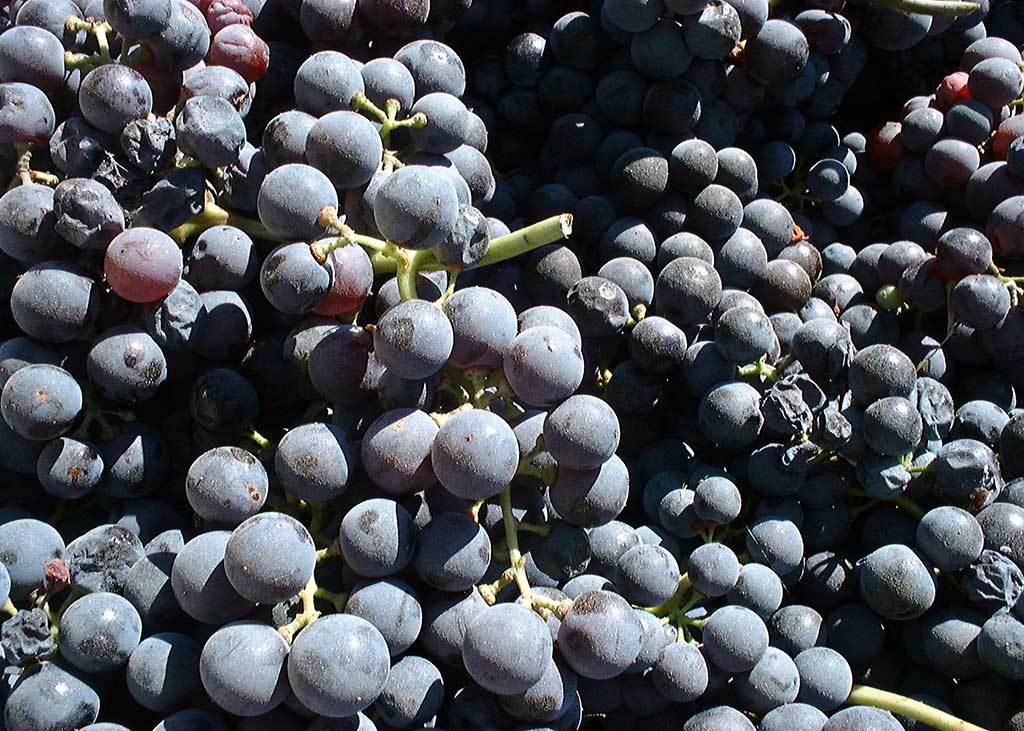 Having never been to Portugal before, I didn’t really know what to expect, but what a trip we had. We landed in Porto then drove about two and a half hours east into the country. The roads seemed to go on forever and gradually became more mountainous. Finally, we started to descend into the Douro valley, a good job, really, as it was starting to get dark. As we rounded bend after bend, the river Douro came into view. What a fantastic sight. It was dusk now, and all we could see was the river winding its way through the valley, and on all sides steep, terraced vineyards as far as the eye could see, it was breathtaking.

Apart from the view, the other thing I noticed was the absolute peace and quiet, not a sound. We had arrived at Quinta Dos Malvedos, a stunning house and winery owned by the Symington family. Here the famous W&J Graham’s port is made and blended.

Paul Symington, present MD, greeted us along with his cousin Rupert. Their family has been in the region for 5 generations making a great port. We were shown to our rooms, just on the inside of the lobby was a sort of holiday pic of John & Norma Major; apparently, he wanted to escape the public eye and a distant cousin new the Symington’s and hey presto he came for about 10 days. I can’t blame him. It’s probably as far away from the rat race you could probably get. Everywhere we filmed, the odd photo of John Major would pop up. There is even a brass plaque on the wall outside of a tiny, empty restaurant near Quinta Da Senhora Da Ribeira, saying John Major was ‘ere, all a little bizarre.

After a quick shower and a little “voice over” work, we settled down to dinner, a very simple affair of soup, then a fabulous slow roast kid just cut up into large chunks and salted quite heavily. It came with a little gravy and runner beans and roasted potato wedges. The kid was fabulous, soft textured, beautifully tender, with hardly any fat. Next, we had a dessert of burnt cream, but not like I have eaten before, thick and really creamy. Then, finally, cheeses, a superb local sheep cheese that you spoon out from a hole in the middle, a couple of goat’s cheeses and a Spanish Manchego, all with crackers or local bread; what a dinner. The wines were made by the Symington’s, and a cracking red name escapes me now, I will find out, on sale in Waitrose soon, sadly for us the white they keep for themselves, fair enough. Then, of course, a couple of bottles of superb vintage port.  What a way to start!

We all slept well and rose early to film the grape pickers on the slopes, where whole families pick together. We filmed a mother and 3 daughters all picking away, sadly as Paul told me the tradition of the family pickers is not the same. The youngsters want to go to large cities like Porto or Lisbon, and village life is not the way it used to be.

The grapes were spot on this year, and Paul was very happy, they had had a good spring and summer, with just a couple of day’s rain at the end of August, all was perfect. They had to gather the harvest quickly, in a total of about 5 weeks. Paul explained that the grapes had to be slightly shrivelled (raisoning) to get the sweeter, port taste. Too much, and the wine is too sweet, too little, and the wine has a weak flavour. We spoke about many things and filmed “till about 8.30, then off to the house for breakfast.

By now, the day was heating up, about 35 degrees, and the grapes were being delivered to the winery for crushing.

The original stone Lagares (where the grapes are crushed) is still in use in the winery, and as Paul said, “if the Romans were to come back now, nothing would have changed” it was an amazing sight. In the next room, the mechanical process has taken over. Paul had developed a large machine that mimics the crushing of a human foot, even down to the pounds per square centimetre, crushing power. It was very impressive. He said the idea had come from the box photocopier paper comes in, and took his idea to fabricate and here is the result. I think it took a little more than that, but nevertheless, it was impressive. He explained that the crushing of the grape is really important. Too much and the tannins come out of the skin and spoil the wine. Too little, and the deep red colour from the skins essential to port is not there.

The whole port wine process is very simple, explained Paul; the grapes arrive and are washed well. They are then picked over for leaves and any unsuitable bunches.

Next, they are crushed, either by foot or by machine and placed into Lagares or large tanks where they are fermented for 48 hours depending on heat and weather conditions.

The only things that are added are tartaric acid and sulphur—the cap (all the skins and seeds) sets, and the juice forms underneath. Paul showed me a great trick with a lighter. As the grapes ferment, they give off carbon dioxide, forming an invisible mist over the fermenting grapes. If you light the lighter and bring your hand down towards the cap, the flame rises up from the lighter and burns on its own 2-3 cm from the lighter itself. The carbon dioxide covering is a vital part of the process. It keeps all the bugs and bacteria at bay.

The cap is pushed back into the juice a couple of times to improve the colour of the wine; it is then strained off and filtered. It is then pumped into large barrels, and 70% proof brandy is added at a ratio of 20% brandy to 80% grape juice.

It’s then left for 18 months in large barrels to mature, then either bottled (late bottled vintage) or Tawny aged in the wooden cask, that’s it.

The result is a beautiful, rich, velvety drink that will keep for years and improve with age. We tasted the 1965 Vintage port that was absolutely superb, also younger 10 and 20-year-old Tawny’s.

The next day we went to another of Paul’s winery’s Quinta Do Vesuvio; here, all the grapes are still trodden traditionally. All the villagers gather at 7.30 pm, and they tread for 2 hours non stop. After that, have a quick break, then tread another 2 hours, but this time with an accordion led band. They even dance together in the Lagares singing the ….. Whilst drinking ‘foot water’, basically a second fermentation wine, runoff from the treading process, and about 6% very low alcohol. Paul danced with several ladies (good to see the boss keeping up staff morale). This goes on every night for 5 weeks. Make no mistake; this is a highly organised affair, with two rows of 12 people arms linked, treading in time to a man calling the shots. I tried this on camera, and it is very hard work, up and down, up and down, all very carefully coordinated. One thing I will remember is the coolness of the pressed grapes; it was a pleasure to cool down after such a long day. The only downside was the stained legs and toenails. It’s been some 10 days now since I returned home, and my toenails are still discoloured. 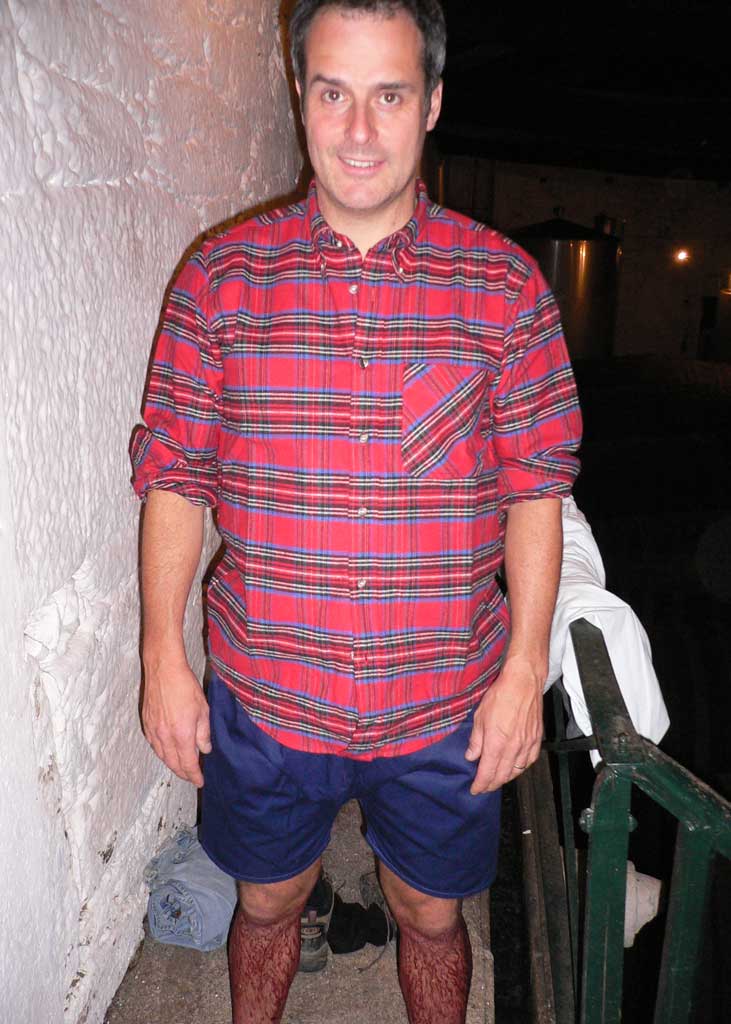 The port is stored in huge barrels and taken by road to Oporto, where they are stored; some 4 thousand are stored at the moment. Paul showed us wonderful old photos of as many as 30 barrels being transported by the river Douro to Porto to be stored. This was a 4-day operation and was extremely dangerous, even shooting rapids as they went.

Years ago, the barrels were transported straight to England to mature, but the moist, cool climate in Oporto is perfect for maturing the port, so all the maturing is now done in Portugal.

We tasted some fabulous ports on our trip, all in great condition. It really opened my eyes to how important port wine is to British tradition. Not only to be drunk with cheese and at Christmas but as an everyday drink to be appreciated and loved.

I have only the greatest respect for families like the Symington’s, five generations of port wine-making and still going strong.

I asked Paul what the future was for himself and his family, did I think he would carry on with this very tough business. His answer was, and I quote, ‘I don’t want to sell up, I hope my children carry on, what would I do…drink gin in the Algarve… no thanks’ Quite right too.