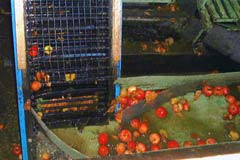 If I say, Crimson King, Lorna Doone, King’s Favourite – you might think I’m talking about racehorses, pantomime characters, or at a push 19th Century novels – no, all wrong they’re apples – beautiful British apples!!!!

From the early 1800s, the Sheppy family has been making cider in the West Country. From 1925 we have been renowned for our quality ciders, which have gained between them over 200 awards and two gold medals. Gone are the days when every farm made its own special cider, but down in the Vale of Taunton Deane, in the Cider County of Somerset, there still remains one of the true farmer cider makers – Sheppy’s of Bradford-on-Tone.  Today people come from far and wide to Sheppy’s 370-acre farm, where there are 42 acres of cider orchards, producing apples with such romantic names as Kingston Black, Yarlington Mill, Dabinett, Stoke Red, Tremlett’s Bitter and many more. 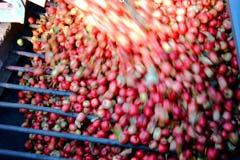 The first cultivated apple found in Britain is believed to date as far back as 2000 bc, but we’ve been growing them ever since and the UK is now home to over 6000 varieties of apple. And in the West Country County of Somerset apple orchards abound – you can hardly go a mile without coming across an orchard – they’re an integral part of the landscape. 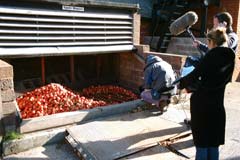 As I say on camera ‘But of course Somerset is synonymous with what they produce from their apples rather than the apples themselves -Cider. Otherwise known as Scrumpy or Rough – and believe me if you drink too much – rough is exactly how you’re gonna feel!’

Having cooked and drunk plenty of Sheppy’s cider when I worked in Taunton, it was nice to come and see the process from start to finish. We arrived just at the right time of the year, just in time to harvest and press the apples. The varieties that David Sheppy grows are very old. Some of his trees are over 100 years old the most famous is Tremlett’s Bitter and Kingston Black.

The ancient press used to squeeze out the juice is a fine piece of machinery. Layered with racks of milled apples the whole squeezing process is fascinating and well worth a visit.

The sheer scale of the fermenting vats is amazing. Large ladders are needed to reach the top, and once fermenting, the bubbling is like something out of a Horror movie. Once fermented this takes a few weeks the cider is ready for maturing then bottling.

The wonderful smell around the whole farm is quite overpowering but very interesting; I took some bottles of Dabinett apple cider to Norway for a chef’s demonstration. It was a real hit they loved the stuff; I suggest you try it for yourselves.