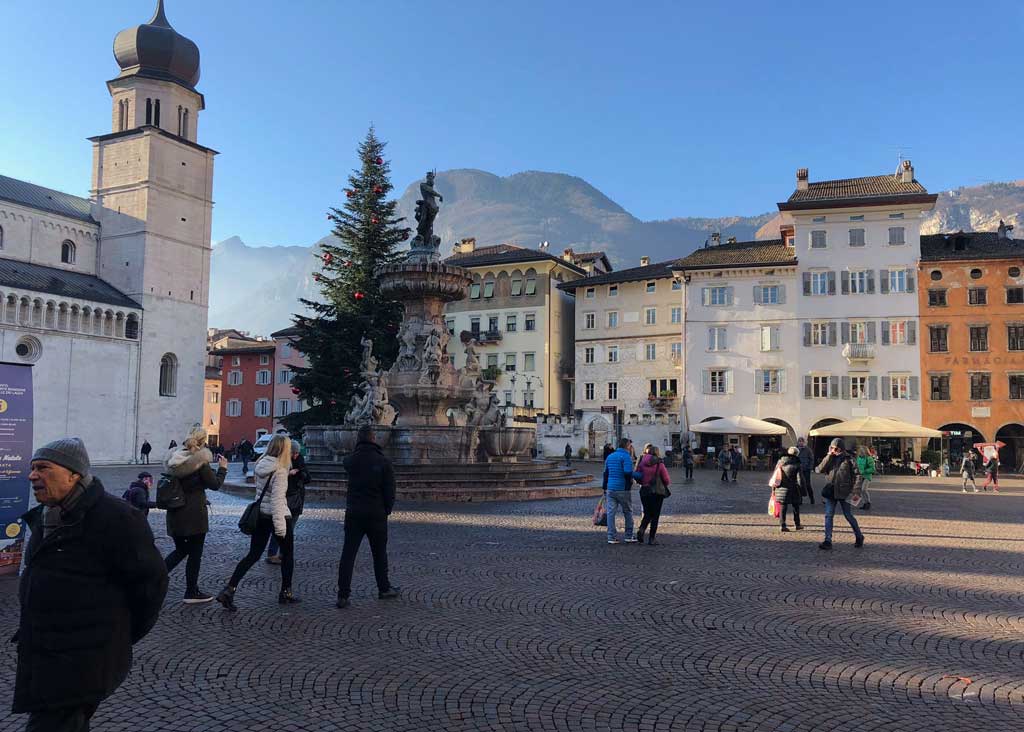 My whistle-stop trip to this fabulous area in Northern Italy started with a 2-hour drive from Venice airport. We could have flown to Verona, but we kept chopping and changing the days and itinerary, and in the end, the only flight we could get was to Venice. We were here to film two short VT’s for This Morning. The boss wanted snow and lovely Christmas views.

After a good hour trying to sort out the car, we finally headed north and eventually arrived in Trento late in the evening. The Hotel America where we were staying was fine, clean, smart rooms, if not a little dated and very professional staff. Then the hotel restaurant closed early, so we set off to find some late-night food. We pitched up at the Green Tower restaurant, a 2-minute walk from the hotel. To be fair, we didn’t really expecting anything as it was 11.20 pm. I could not have been more surprised; the place was buzzing and full. We were welcomed in and given menus (how many places in the UK would do that at 11.20?) As it was so late, I wasn’t really up to much, so I had to try Strangolapreti, a local speciality. This dish has been around since the 13th century and is a dumpling that can be a made using speck (cured pork) spinach or potatoes. These dishes are always sprinkled with Trentingrana, a sort of Grana Padano type cheese and lots of butter. I suppose due to the close proximity of Germany, this kind of dumpling is very German in its style, if not a little lighter in texture. We tried the spinach and the speck versions. Both had good texture and flavour, if not a little underseasoned. I did also try a lovely, hearty dish of braised pig cheek with fried polenta and mash. The perfectly cooked, deliciously tender pork jowl with fabulous and the mash was a complete joy. Not so sure about the fried polenta balls though, they were a tad dry. Nat, my boss, had roasted octopus, which was equally delicious. A nice bottle of local Sauvignon Blanc washed everything down perfectly. 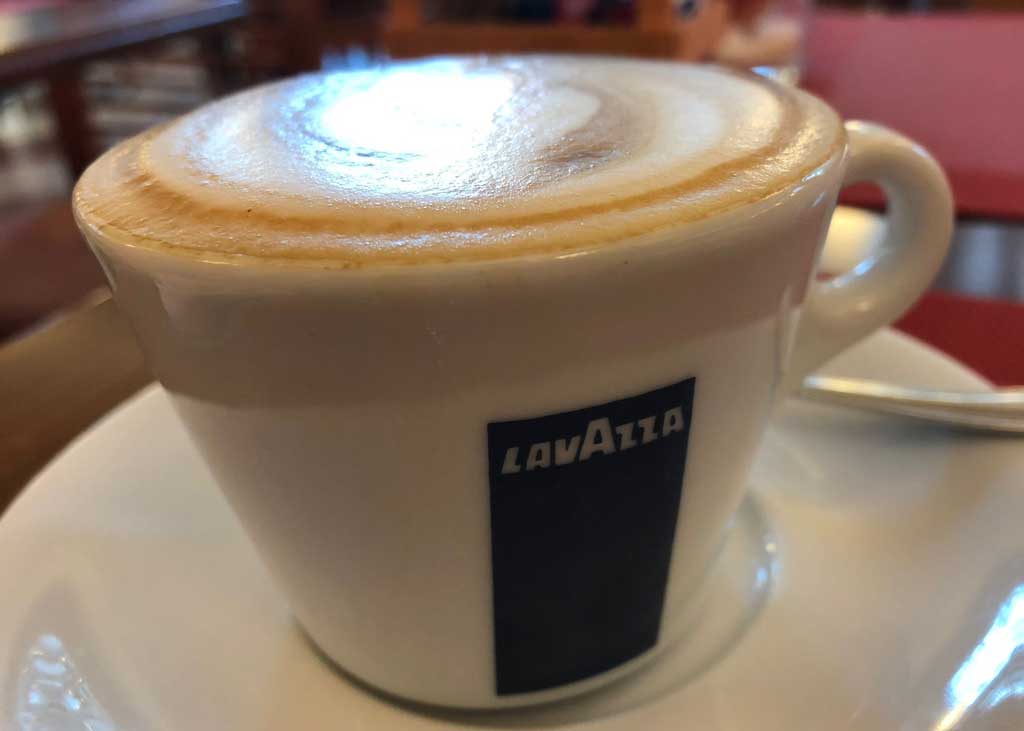 The next day we are up early, and after a superb coffee and light breakfast of salami and a lovely soft local cheese, we set off to film the local Christmas market. There are two here that comprises over 90 stalls and food outlets. We were here to check out two specific local foods, Panettone and Tortel de Patate, a sort of potato pancake very similar to a rosti.

The first stop was Panificio Moderno, the award-winning panettone bakery rated in the top 10 in Italy. They make three versions here traditional, orange and chocolate and the latest addition a coffee and chocolate version. We film with the chef Alessandro and have a good tasting session. 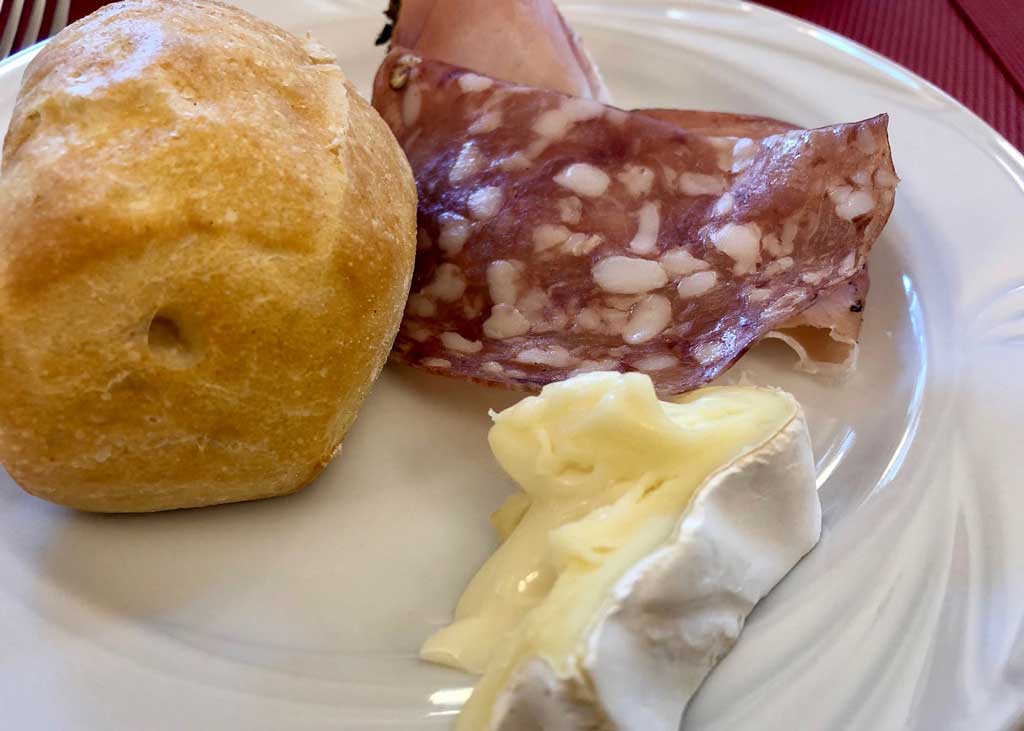 The taste and very open texture are completely different from anything I have ever tasted before, and I just love the buttery orange-infused flavour. Here they preserve all the fruits themselves for the 4000 they make for Christmas and Easter every year. After another quick coffee, we film around the market and then have a smashing lunch, not a bad job!!!!

Said lunch was at the very fashionable Scrigno Del Duomo restaurant, right on the square next to the church. I was slightly concerned as I went to the loo to see the dreaded water bath in the open plan kitchen, but as it turned out, I needn’t have been.

The first course was a selection of local cheeses and cured meats, all superb.

Next, a simple dish of squid ink pasta with tuna bottarga, herbs and dried raspberry powder. Lee (cameraman) had the risotto with poached egg and lots of fragrant white truffle slices. This was serious cooking…

We had to get back to the market to set up for our filming before it got dark and busy. We had commandeered Luzernerhof stall to cook the famous Tortel De Patate. As we were only using one camera, we always run through first, so we know when to stop and start. This is where time runs away with you if you are not careful.

Luca and Andrea were brilliant hosts, had all my prep ready, and even said I could have a job! So, it’s a very simple recipe that consists of grated potatoes that you squeeze out most of the water. To which you add salt, pepper, potato starch and a touch of oil, mix well and griddle in a pan or hot plate. There are various toppings such as creamed mushrooms or sautéed sausages. I served mine with some cured meats (from the market) and Mostarda (preserved fruits steeped in a mustard syrup) and chopped lettuce and local Trentino cheese (can’t remember the name) From start to finish was about an hour!!! 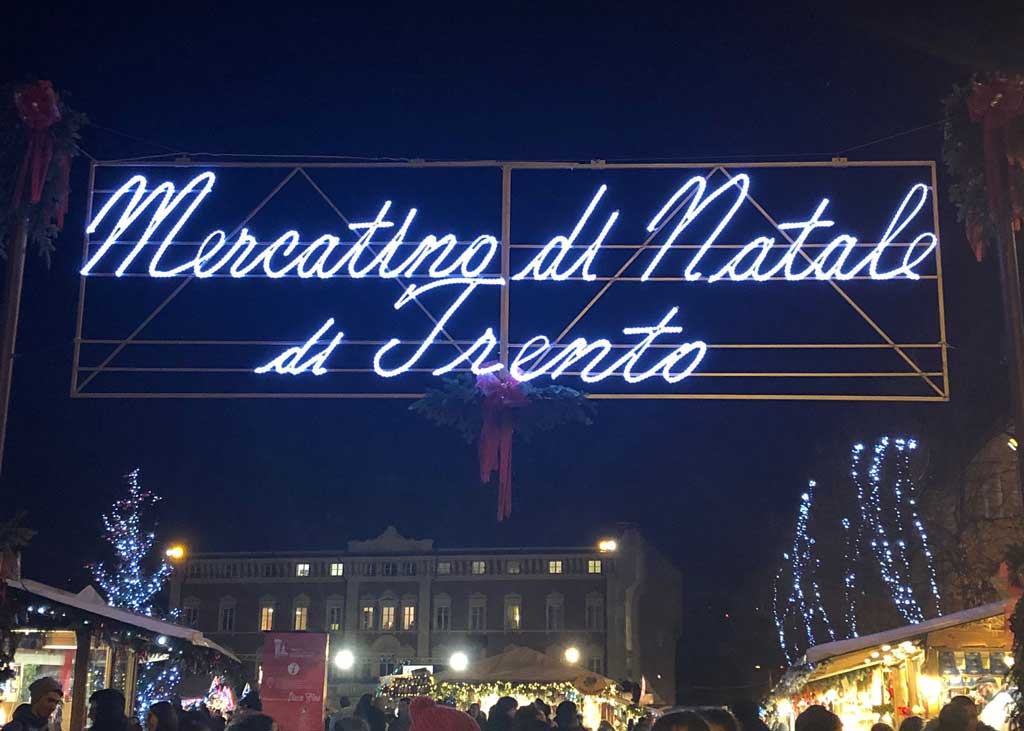 By the time we finish, it is well into the evening, so we head back to the hotel, quick scrub up and off for a bite to eat. Dinner was at Ristorante Antico Pozzo, a two-minute walk from the hotel. The food was delicious here, focusing on simple ingredients cooked correctly. I had cured meats with persimmon (very good) and a squash risotto with a prawn (singular). Nat had leek and blue cheese pizza, all perfectly acceptable.

On the final day of filming, we are up early and off to the mountains to film at the Rifugio Fuciade, a family restaurant and hotel set in the heart of the Dolomites. After an hours drive north of Trento, we arrive and decamp onto our next mode of transport, a sleigh!!

Off we go and film for the next 40 minutes all the way up the hotel. The views are breathtaking, and the sun is shining. My driver Michelle is good fun. I think he’d had a few grappas the night before. His two horses Jacqueline and I’ve forgotten the other one’s name, are very well behaved although they constantly fart, and the smell as I was right behind them!!!! 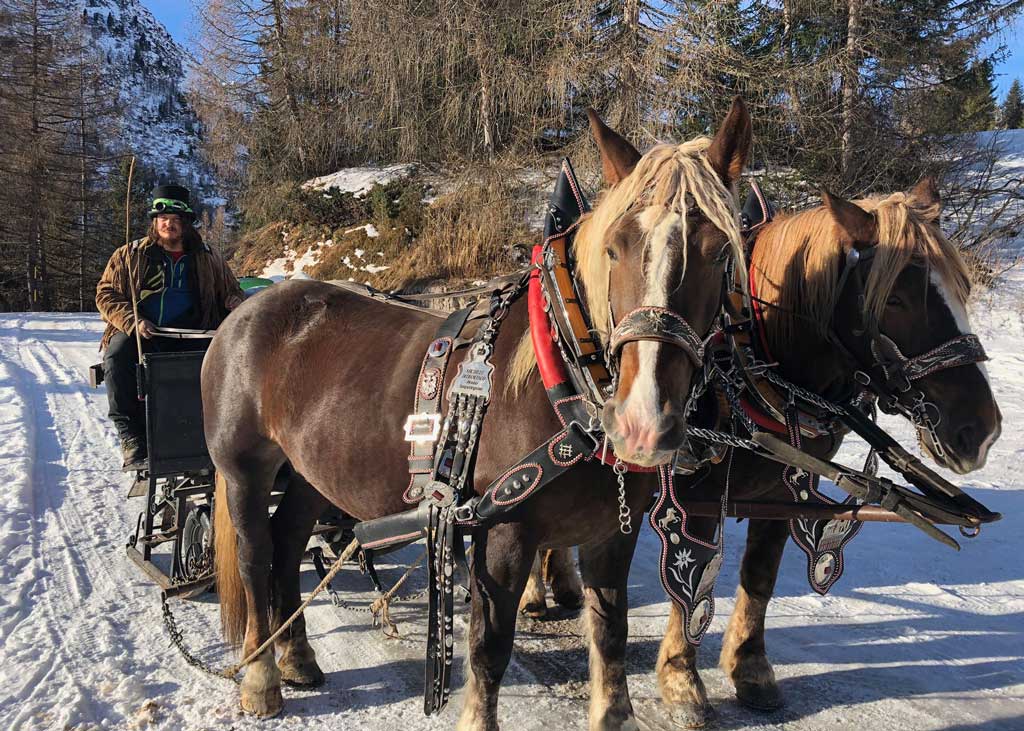 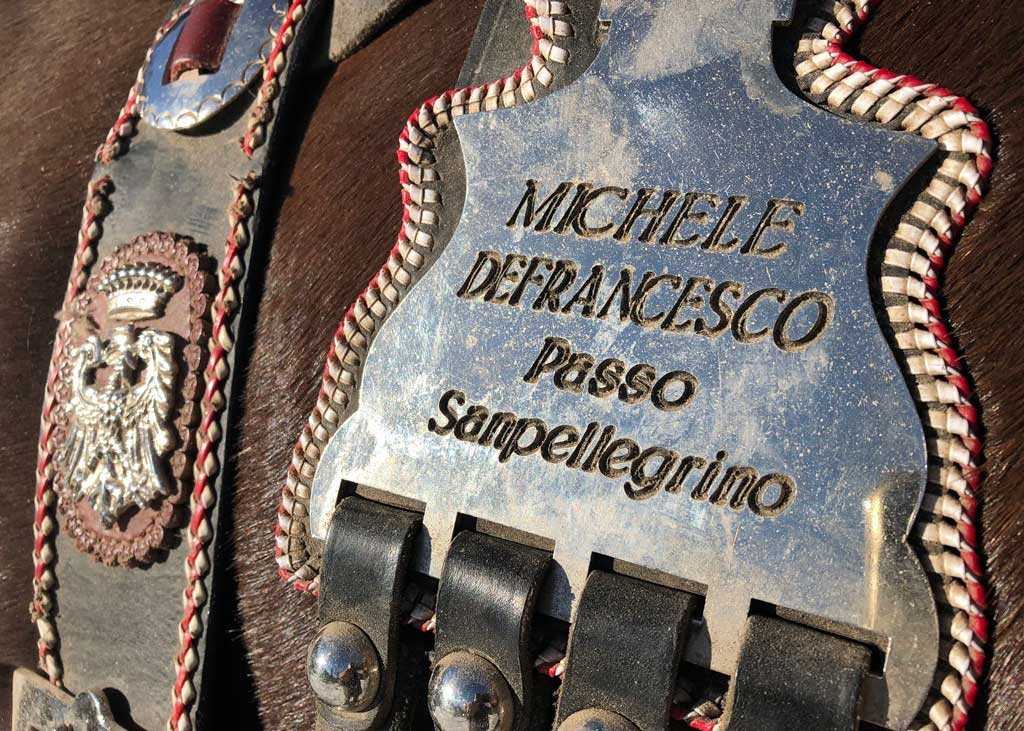 We film on the way and finally arrive and meet chef Martino Rossi, son of the owners. We have a quick coffee and set to film in the cellars and his magnificent cheese and meat curing room.

We then film my panettone pudding VT. The delicate sponge is soaked in a pine grappa custard, cooked over an open fire pit, then finished with Martino’s ice cream and a few berries. Nat is worried about the light changing once the sun has disappeared behind the mountain, so we crack on. It’s all done and dusted in 30 minutes.

After we tuck into a late lunch again of dried meats and superb cheeses, followed by polenta blue cheese hand bake, perfect for the setting we were in!

We take the quicker route back to our car via Martino’s 4 x 4. By the time we get back to the hotel is dark, and we are all feeling pretty stuffed. So, the evening is a quick drink and an early night as we had to be up early to drive back to Venice airport. I really enjoyed this mini filming break, great simple food in stunning surroundings. One day I’ll pop back, but I do say that about everywhere I film!!!

Phil Vickery Posted on 2 May 2018
Over the years, I have been fortunate to have visited Norway a few times and also cooked and filmed [...]
0