Caerphilly is a traditional Welsh cheese. It is named after the town and county in South Wales, where it was first produced by local farmers for domestic use in order to use up surplus milk. 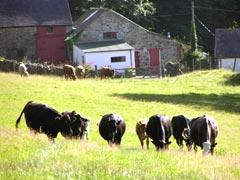 In the 1830s it began to be sold as a source of additional income.

Todd and his brother Maugan produce every day of the year from milk from all the surrounding farms. Not only that, they make all their cheeses by hand, this is what really impressed me when we filmed there last year. The meticulous attention to detail came across very quickly indeed. This is no surprise when you hear they learnt their trade from such great cheesemakers as Chris Duckett.

The whole process from start to finish is timed to perfection, and the end product is probably the best Caerphilly cheese I have eaten in a long time, to me it tastes slightly sweeter and has a creamier edge. This may be due to the fact that it was slightly older. The texture is also very important in a Caerphilly, all down to the fact that the curds are cut very carefully by hand, not milled. Todd is very concerned, and rightly so, in not milling the curds for the loose the traditionally open texture. 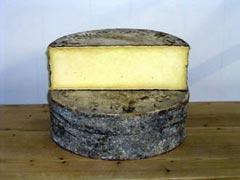 His storage of the cheese is again very carefully monitored so the cheeses do not mature too quickly or too slowly. Humidity plays a big part in the cheese ripening process and is critical to the taste and look of the end product.

When we filmed, his mum produced the best lunch of the whole series, producing some 10-12 pies, lemon puddings, quiches, baked dishes, salads, sandwiches all from both her son’s labours, it was fabulous!

His cheese is sold in Waitrose and through reputable cheese suppliers; I had a nice chunk of the stuff in Lincoln a few weeks ago, so keep a lookout for this great cheese.