What a great place to film, the last time I went to Faversham was with the school all those years ago. The place hasn’t really changed that much, apart from the house prices that is.

The oyster fishery in Whitstable has been here since Roman times and has become the home of the British oyster.

Richard & Angharad run the Whitstable oyster fishery and The Royal Native Oyster Stores Restaurant, where the majority of all the oysters come to be eaten by hungry oyster fanatics. The restaurant is simple, tasty and only using top-notch ingredients.

Filming the oyster fishing I thought was a doddle, how foolish of me. Not only is it hard work, it’s made tougher in rain and wind, and also coupled with my seasickness (caught on camera by my dear director, thanks Michelle) made the film all the more difficult.

The oysters are fished, cleaned and graded all on the boat, small ones are put back to be fished for at a later stage. The huge oysters I saw, the size of grapefruit are all kept are sent to London for the Chinese restaurant trade for, yes oyster sauce. 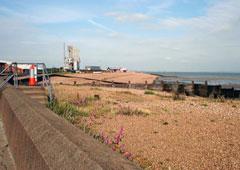 Andy Riches, the skipper has been fishing for oysters on this coastline for 40 years, and now works part-time for Richard. I was amazed at how he found them, especially as we were out about a mile and a half, but find them we did. By this time I was feeling pretty rough and just wanted to get back to shore.

Once back on dry land, all the oysters are placed into purification tanks for 48 hours to clean out all the rubbish and sand. 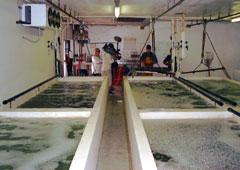 They are then sold on to the trade or served in the restaurant, Richard and I filmed right outside the restaurant, tucking into a large platter of natives, Irish, Pacific’s and the odd monster, all fabulously fresh.

Like all the films we made this year, I have been really impressed by the sheer dedication to the end product of all the companies we have visited. No shortcuts anywhere, just getting the basics right. Here again, is a simple natural product lovingly cared for and looked after. Then transported and served correctly, how simple is that!

Once we had finished filming, the crew and I went to the bar and had several pints of Guinness to settle our stomachs. Apparently, it’s the best thing to do, well it worked for me.